White-box cryptography is a relatively new field that aims at enabling safely cryptographic operations in hostile situations.
A typical example is its use in digital-right management (DRM) schemes, but nowadays you also find white-box implementations in mobile applications such as Host Card Emulation (HCE) and the protection of credentials to the cloud.
In all these use-cases the software implementation uses the secret key of a third-party which should remain secret from the owner of the device which is running this executable.

So far all published approaches to turn a symmetric cryptographic algorithm in a white-box implementation have been broken, at least on paper.
However, all these cryptanalytic approaches require a detailed knowledge about the white-box design used, which typically requires a painful reverse-engineering effort of various obfuscation layers, followed by a relatively high-level of expertise and a thorough understanding of the scientific attack in order to successfully extract the private key.

And honestly I don’t understand much all those nerdy papers.
Let’s see if there is a way how to automate attacks without much effort.
The idea is to transpose well known smartcard power analysis attacks to the white-box setup.
Indeed when one attacks a smartcard with those techniques he doesn’t care much about the exact implementation details.

The key, so to speak, is to use dynamic binary instrumentation to record traces of a few executions of the white-box implementation and make the obtained information compatible with the power analysis techniques.
That’s what we call Differential Computation Analysis (DCA) in reference to the Differential Power Analysis (DPA) used against cryptographic hardware.

Let’s take for example the white-box challenge that Brecht Wyseur put online in 2007.
It’s a GNU/Linux command-line binary (a Windows version is available too) called wbDES, which encrypts a single plaintext block with a fixed key:

Oh but wait, we need tools…
Isn’t the coming talk Hiding your White-Box Designs is Not Enough at Troopers16 the perfect occasion for a release?
So here we go: SideChannelMarvels is the new home of an awesome set of tools! (I can say so because it’s the contribution of many people, not just me 😉 )
More features and more white-boxes will come soon but, well, it’s a start…

First step is to trace the executable so it’s naturally in the Tracer repository that we’ll find ammunitions. TracerGrind is an instrumentation plugin for Valgrind while TracerPIN is one for Intel PIN.
TraceGraph is a GUI to visualize execution traces.
In this example we’ll start with TracerPIN and TraceGraph.
We could jump directly to the attack but it’s always nice to have some visual support, which is especially useful to find the sweet spot where the actual crypto is activated in larger binaries.

Once it’s installed, acquiring an execution trace is as easy as:

The trace, containing all the executed instructions, read and written data and their addresses, is now in a database.
To have a quick overview of what’s happening, we’ll use TraceGraph, the third tool of that repository.

From there you can connect to the local database and open our fresh trace. After rescaling with the “Overview zoom” command you’ll get something like this: 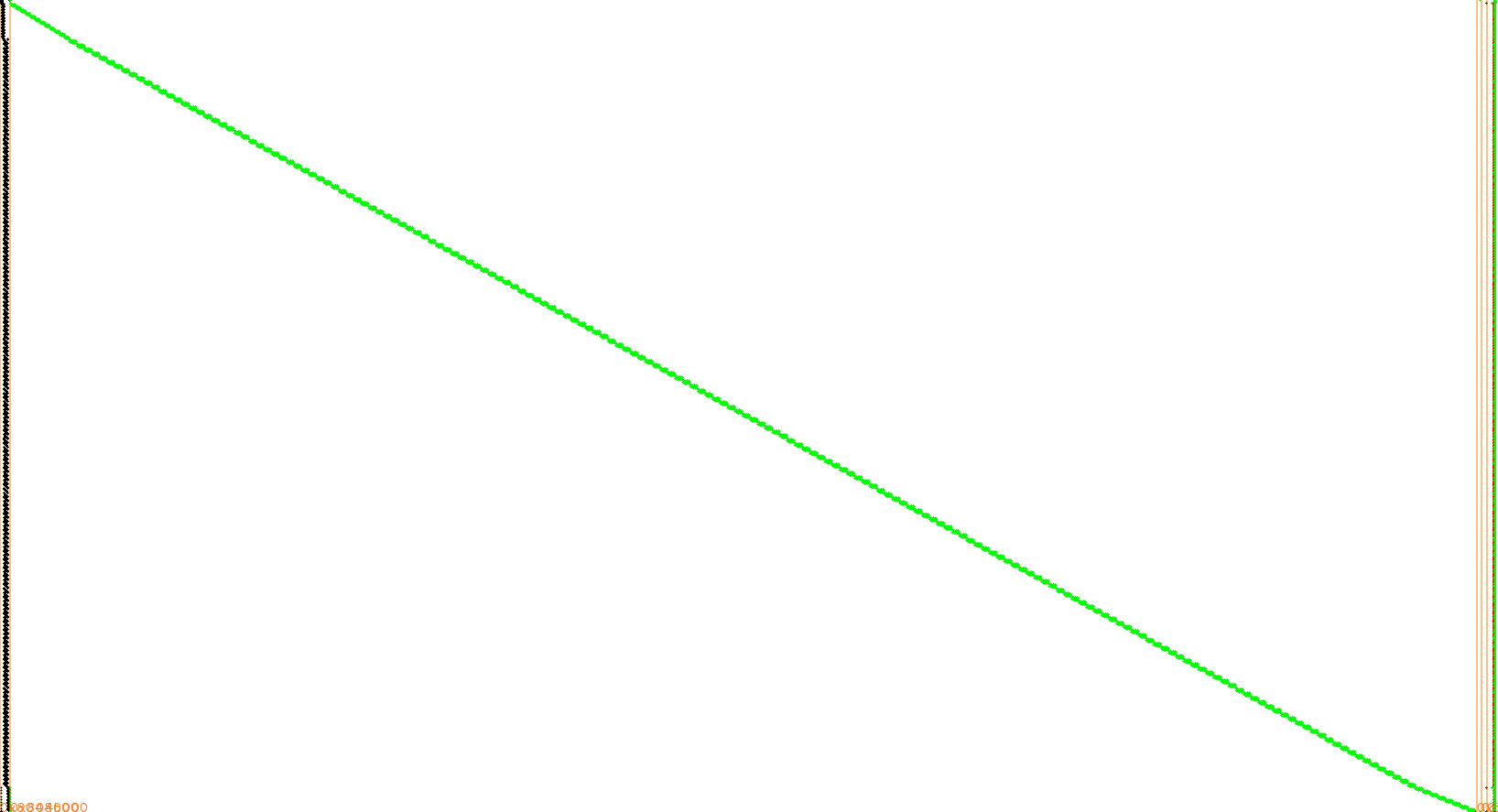 The execution goes from top to bottom, the horizontal axis being the memory address range. We see on the left the instructions in black looping while reading quite a lot of data somehow linearly, shown in the green diagonal, while on the far right things happen on the stack.
Let’s zoom on the stack: 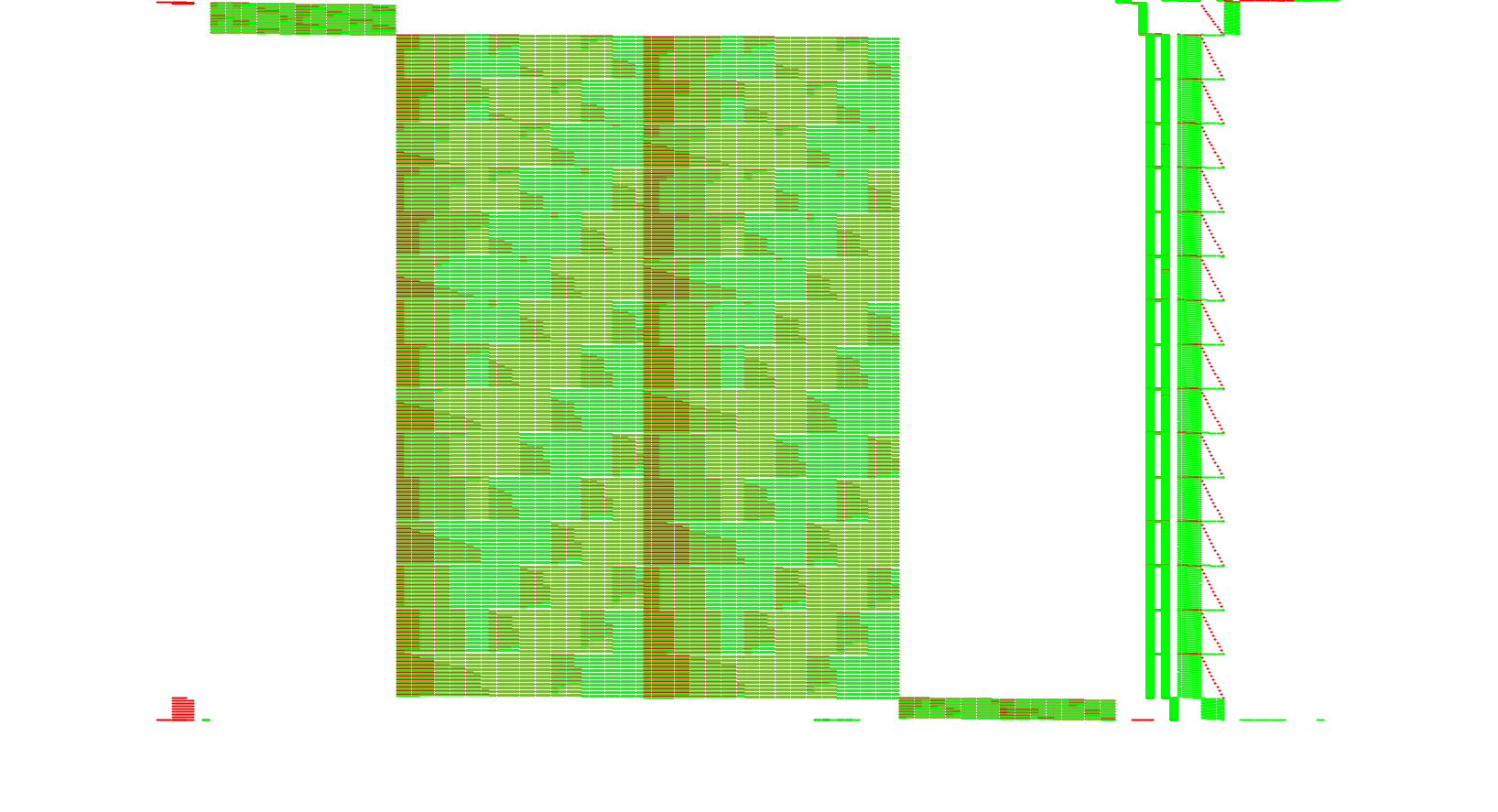 Now the DES rounds are visible. To perform the DCA attack, one needs to collect several traces during the first or the last DES round. In large or slow implementations TraceGraph is helpful to define a range to target only e.g. the first round but our example is so small that we can blindly trace the entire execution.

Acquisition of traces is made easy with some script available in the Deadpool repository.
The scripts configured for this challenge are in Deadpool/wbs_des_wyseur2007/DCA.
The configuration is typically limited to: specifying the executable to attack, how to provide plaintexts to the target, how to read the ciphertexts back, how many traces you want, what to trace (here the addresses of the data being read from memory), and if you prefer to use Valgrind or PIN.
So just run it:

The traces will be attacked by our last tool in the Daredevil repository. To convert them to a compatible format and generate automatically a configuration file, run:

There is also another script ./bin2trs.py in case you want to import the traces in Riscure Inspector tool.

Here we already provided the correct DES key in the configuration file and the tool returned the rank of each of the correct 6-bit round key bytes amongst all the key candidates.
50 traces are largely enough to rank the correct key bytes in first position (rank=0). Comparatively, we talk about hundreds of thousands of traces when attacking smartcards…

To demonstrate an attack without knowing the key, one can edit the generated addr8_r_50_72072.config file to comment out the correct key and choose which 6-bit key byte to break (e.g. bytenum=0 to attack the first DES S-Box).
Run again the attack:

Right now Daredevil doesn’t attack yet all key bytes at once automatically so you’ve to break them one by one. But things will evolve, so expect the instructions and features of the tools to change soon, stay tuned!
If you like this kind of unconventional approach and want to learn more, come and see my talk at Troopers16, there are more white-boxes to break!