This is the first post discussing talks of the Active Directory Security Track of this year’s Troopers which took place last week in Heidelberg (like in the last nine years ;-). It featured, amongst others, a new track focused on Microsoft AD and its security properties & implications. This was the agenda.

The idea for this special track was born out of two considerations:

As this was the first Troopers since its creation where I didn’t have any official roles and out of personal interest (in a very distant past I happened to be the co-author of the first German book on Windows NT4 Security)  I decided to spend the majority of conference day 2 in the AD track. In hindsight I’m tempted to say that the track was a huge success: brilliant talks, pretty much always a packed room, and quite good discussions after the talks. (yes, of course I’m biased, what makes you think that?).

In this post I will discuss two talks one of which happened in the “traditional” Defense track (albeit mostly because even the dedicated AD track did not provide enough space to accommodate all AD & Windows security related talks which the PC considered worthy of acceptance) and the other one was the opening talk of the new track. When I looked at the agenda, alas it turned out that Sean Metcalf‘s “Active Directory – The Journey” and Matt Graeber‘s “Trust” happened in parallel. Wtf! Tell me again it was a good idea & the right time to no longer be involved in the planning of the agenda 😉

With a heavy heart I decided to attend Matt’s talk as I have done some half-baked research (and projects) on trust myself a while ago and I was looking to learn more on the topic (which I did!). So let’s start with that one.

Matt had given this talk before (like at DerbyCon 2017,  at this point lots of kudos to Irongeek for his relentless work on providing those videos) but stated that he wanted the Troopers edition to be a bit more practical (hence “Hands-on Edition”) by including several demos.
He started by discussing typical questions in the context of software and trust. These include:

The intentions of code signing include:

Overall this leads to some naïve assumptions on the defenders’ side and related shortcomings like:

To quickly test our assumptions as defenders he showed the following: 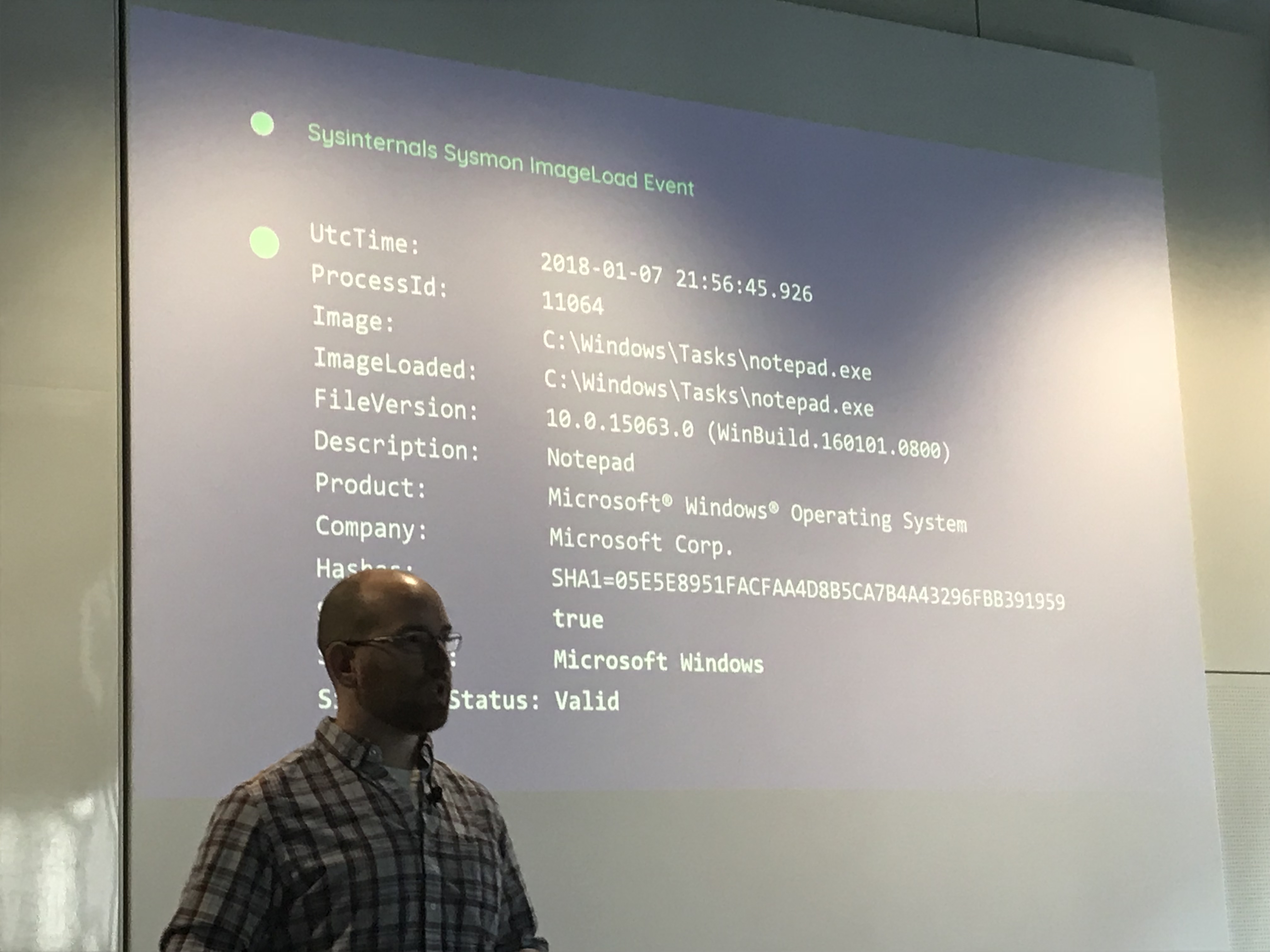 The main point here being that notepad.exe runs out of C:\Windows\Tasks (which is one of the few world-writable directories within the Windows folder) instead out of its default location (C:\Windows). Still one might be tempted just to note that the SignatureStatus is “Valid” and subsequently to go on.

He further provided some background on the way how signature verification is done on Windows where so-called Subject Interface Packages (SIPs) play a major role (some technical background on those can be found here, and this is some PoC Matt wrote to demonstrate subversion attacks on them). The SIP infrastructure is extensible by its very nature and usually relies on the WinVerifyTrust function from wintrust.dll. Another thing to know, and to keep in mind, is that there’s a several signature flavors and respective ways they’re stored (and potentially validated, e.g. the PowerShell command Get-AuthenticodeSignature might use [by default] a different approach than Sysinternals’ Sigcheck).

This can be summarized as follows:

This attacks works as follows:

The main point in the last step being that this can be done as a non-admin user (one just has to confirm a dialog popping up). This left many in the audience incl. myself stunned, and Matt had commented on this in his blogpost (see link above):
“Why non-admin users are able to trust root CA certificates is beyond my comprehension. That should not be permitted in any organization.”

In that post he also describes how to prevent this, by setting

Also, there is some discussion of authroot.stl which can help to determine which Microsoft-specific root certificates are trustworthy for code signing.

Matt concluded the talk with asking the audience “Has your trust in code signing changed?” and stated that he considers pretty much all existing tools as insufficient to fully determine the trustworthiness of (code) signatures.

I couldn’t see this live but I went through the slides and watched the video; on the basis of those sources I will provide the below summary. In any case some guys (incl. Florian Roth who also tweeted during the talk) told me it was a great presentation. Let me further state in the beginning that Sean is not only an excellent speaker but also a really nice guy. I had a good chat with him on Friday during the break of the Active Directory roundtable and he contributed quite actively to the discussion there. Many thanks for that, man!

Sean started by stating that in quite some aspects AD security has improved over the years. On the other hand still a number of things go wrong: 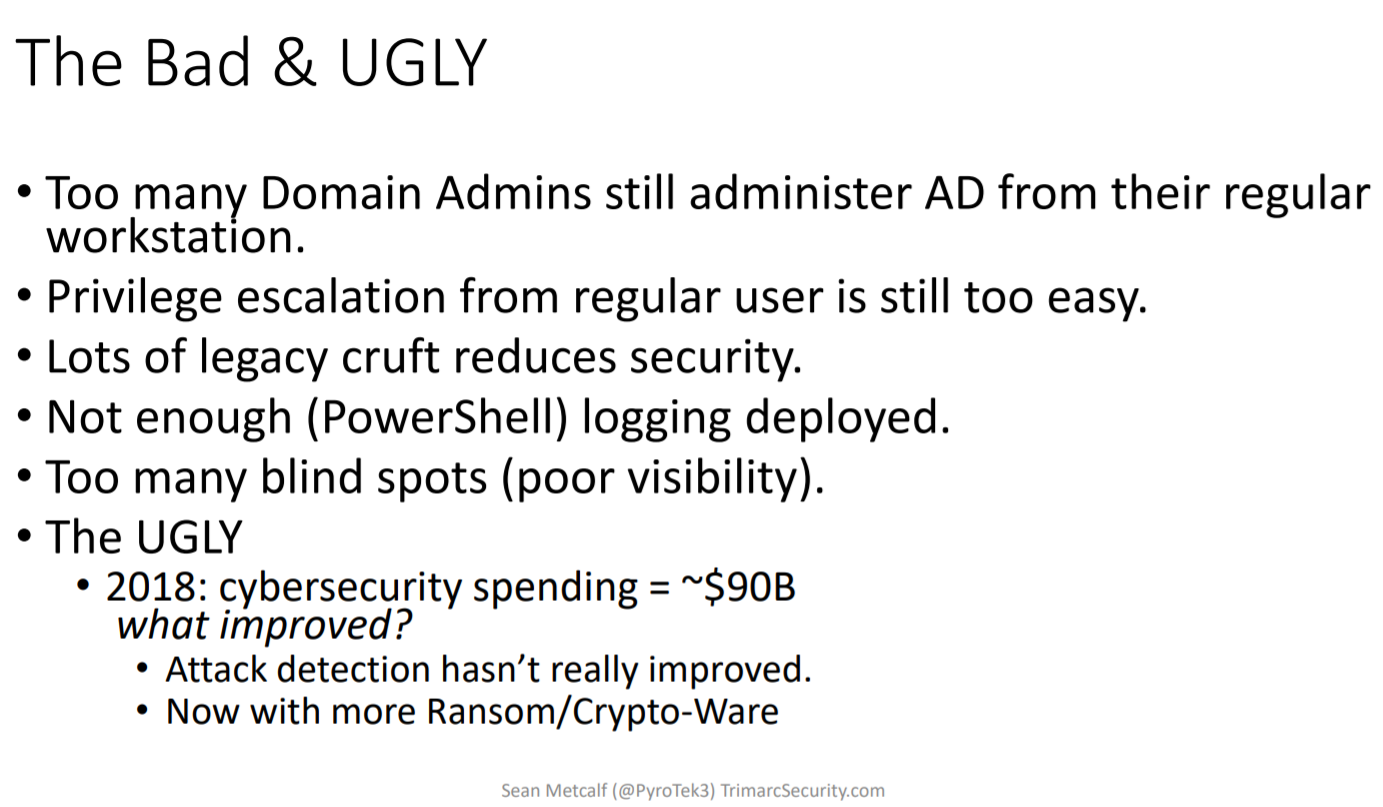 A tour of history through the Windows OS generations followed, with their respective security features and enhancements. He then highlighted the inherent/AD-related security issues of MS Exchange groups (this was also discussed in the day’s last talk on Attacking & Defending ESAE Forests which I’m going to cover in another post): 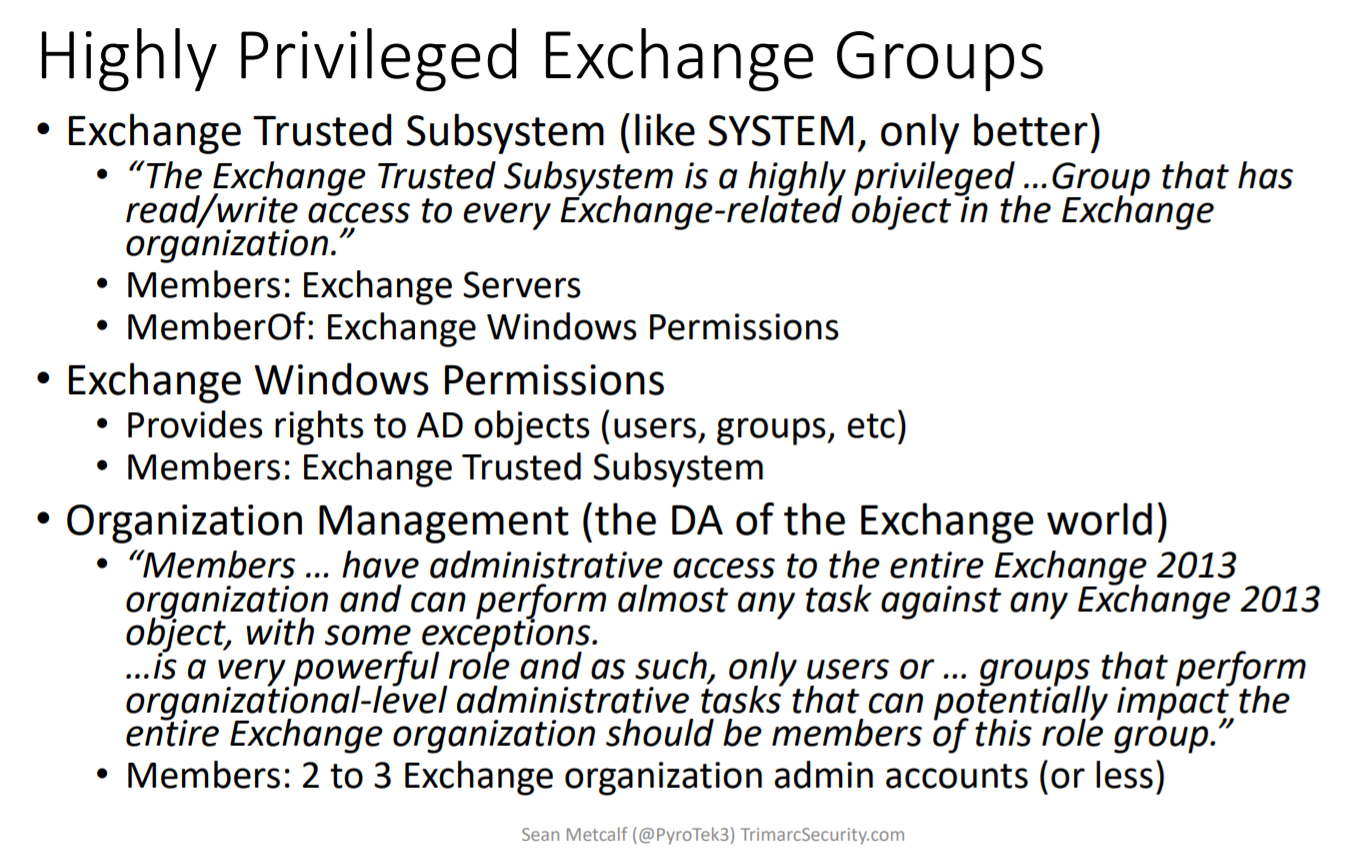 At this point Sean mentioned the ever lasting issue of permission requirements of 3rd party products which he nicely summarized in this slide: 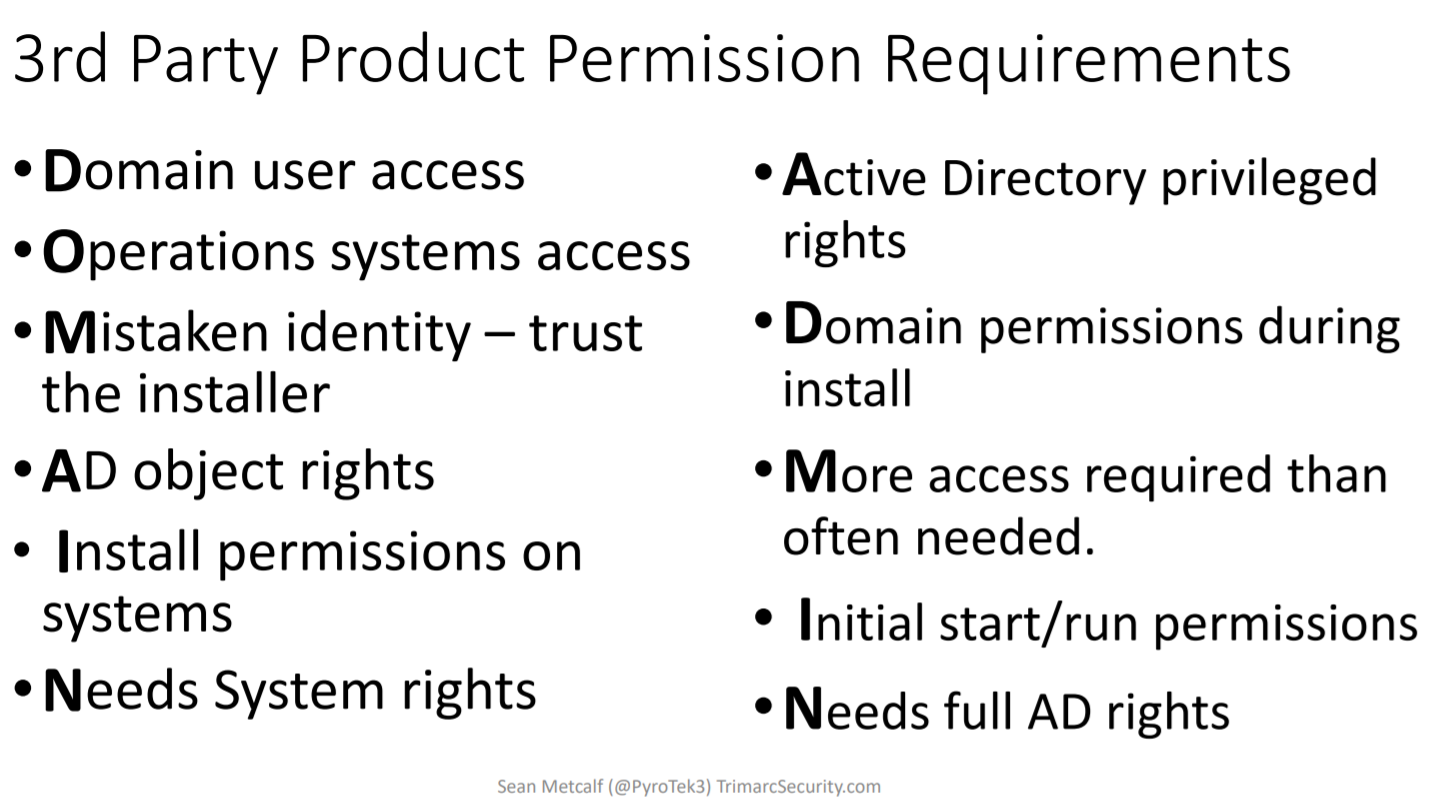 The next section of the talk focused on Azure and here’s the main recommendations: 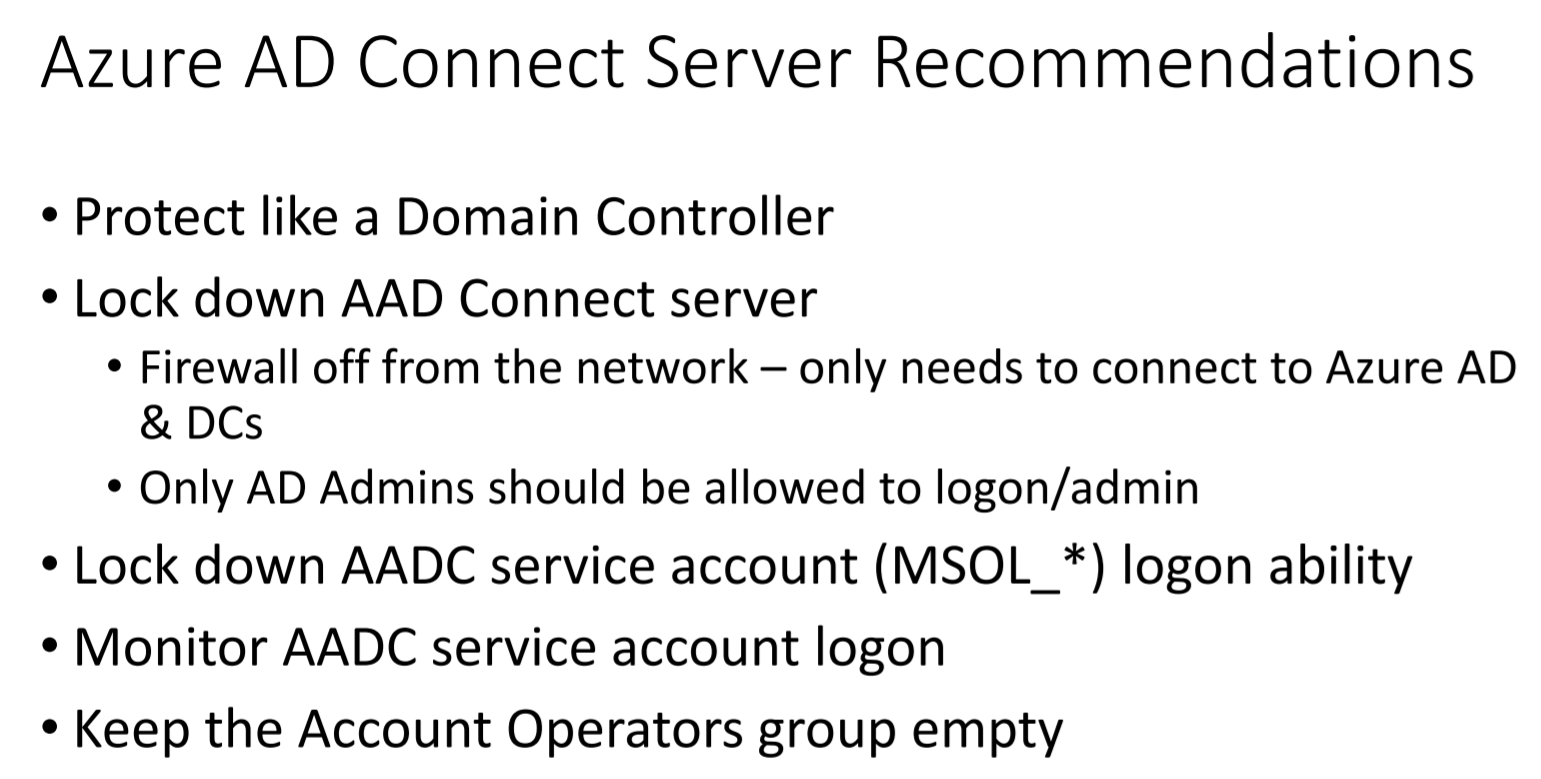 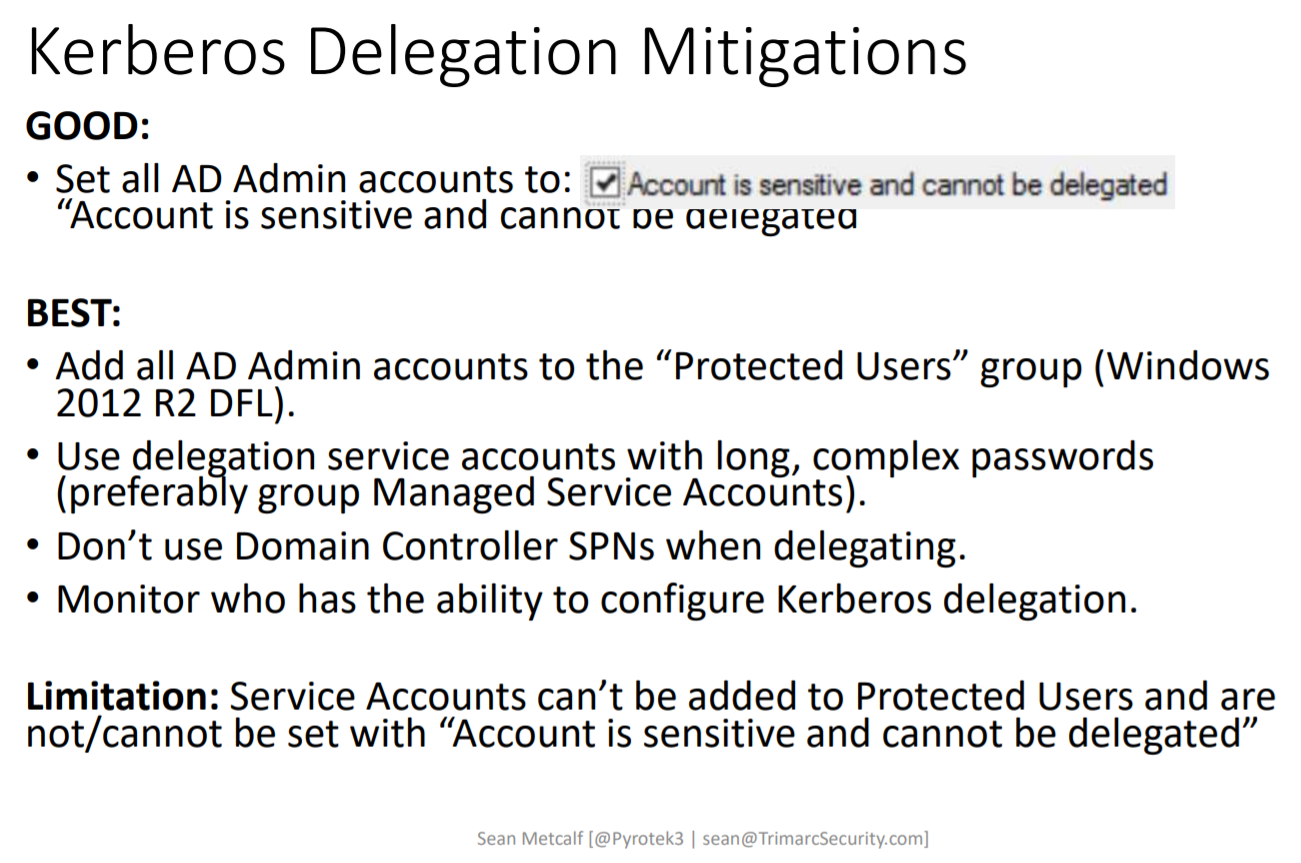 Sean then discussed the complexity of accounts & rights, and the resulting avenues to compromise like 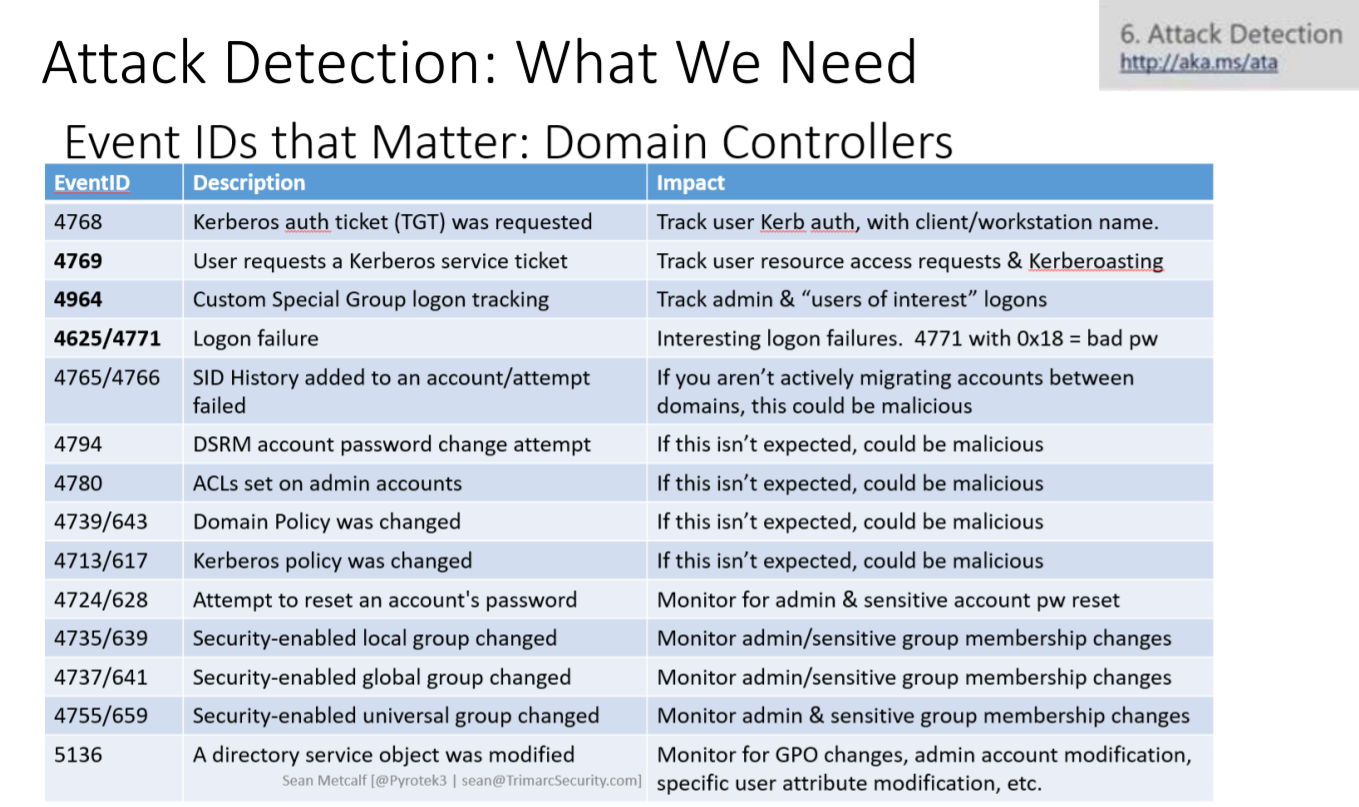 After that he presented the well-known Tier Model, including a discussion of what’s missing:

These are the key recommendations which concluded his splendid talk: 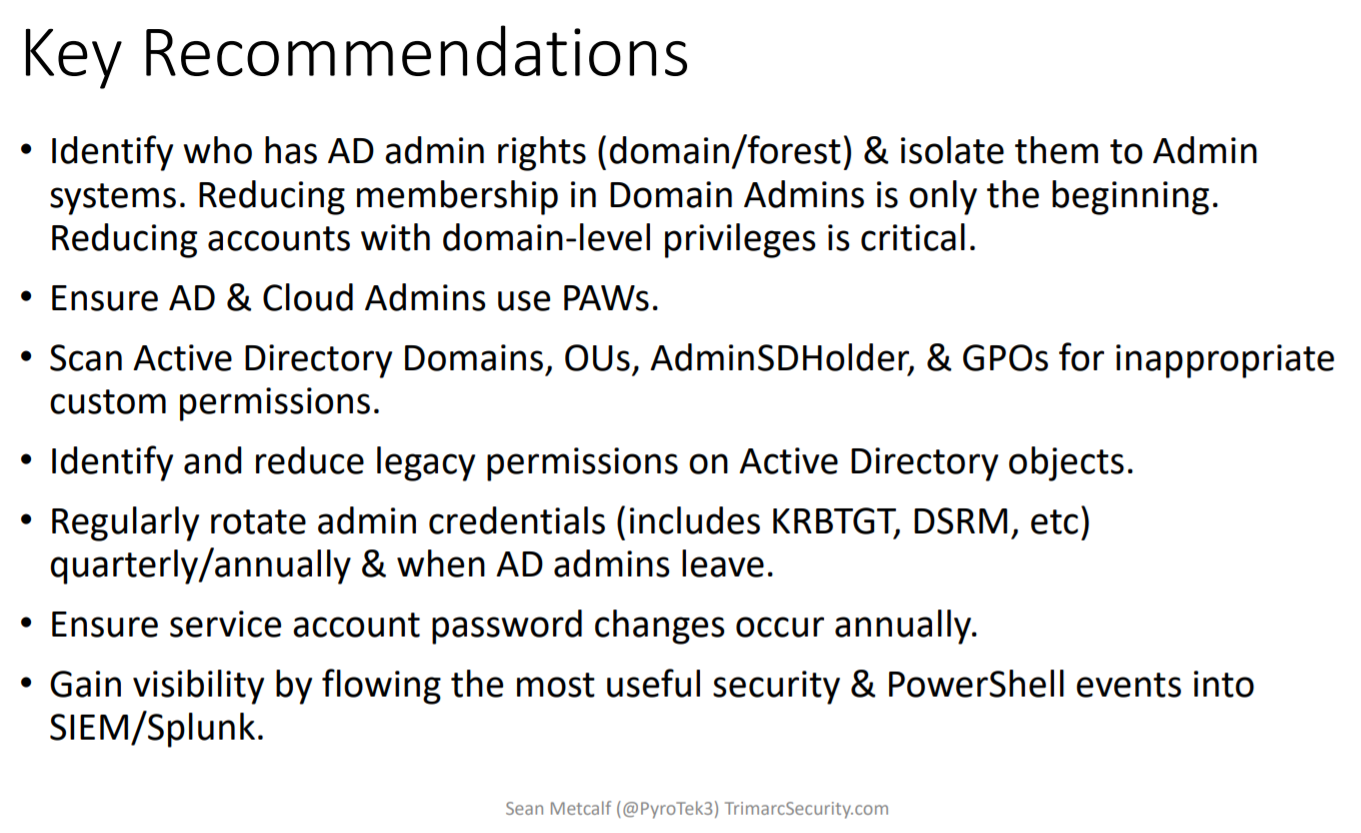 That’s it for today, stay tuned for posts on other talks from the (not only) AD track.

If you want to learn more about AD & Windows security here’s some options.

At ERNW we have an experienced team of Active Directory security experts, some of them with more than a decade of experience in both attacking and protecting complex AD implementations. Those guys regularly give trainings where they share their knowledge.
These are the next public trainings (in German), through our partner HM Training Solutions:

If you want to perform an on-site training in your organization of any of the following #TR18 trainings (in English or in German) please contact info@ernw-insight.de:

Please follow DirectoryRanger on Twitter for the latest news in the field, and for announcements of training and event dates.

We’re currently developing a comprehensive new AD audit & reporting tool called Directory Ranger which will be released very soon. Product details can be found here. Please write an e-mail to customer@ernw-sectools.de for further information, a demo or a proof-of-concept implementation.