I am going to disclose two bug classes I found a while ago in CheckPoint R77.30: Two buffer overflows in the username (no shit) and HTTP method of a request to the administrative UI pre-auth and some interesting injections into the TCL web interface.

Let’s start with the TCL part. The web interface reacted pretty weird when a payload contained a colon. Diving deeper into this it became clear that a colon would actually cause an error from the TCL interpreter. By going down this rabbit hole and learning some TCL (:D) you could see that injecting a colon breaks some part of the application code, probably because colons are control characters in TCL e.g. preceding a global variable in TCL (::MyVar) or separating namespaces.

That’s bad. Reaching a point where the target application is giving you syntax errors because of your input is always a red flag. By diving into this and understanding the application code a bit more it turned out that you can actually set global variables in the TCL environment unauthenticated! A request to the TCL like this

will set a global variable OMFG with the value wtf. This behavior can not only be used to set new global variables (that will probably not be useful), but also to set existing ones. There are some that have a direct impact on the application logic, like MP_PREFIX. This can be used to e.g., inject stuff into the response, therefore works like a reflected XSS. This increases the attack surface a lot and I leave it up to the reader to experiment. My assumption is, that the authenticated part will also have a bunch of nice logic flaws that can be abused in a similar way. I never checked. Ping me if you found something nice with this technique. 🙂

Checkpoint fixed the issue for the unauthenticated part by introducing something like global wrapper variables to ensure they are not being set via this mechanism. If you want to have a quick peek at the symptoms you can login to your Checkpoint (should also work for the latest version R81) and append the following after the session token in the URL:

Let’s move on to the buffer overflow. The TCL is mostly interpreted by a binary called ipstcl2. This binary uses multiple environment variables to do its work. Two of those environment variables are REMOTE_USER and REQUEST_METHOD. And now you probably guessed what happens. During the execution, both variables are copied to a fixed size buffer with strcpy resulting in a classic buffer overflow. A request like the following triggers the overflow for the username:

The pseudo code in the binary looks like this:

Now let’s talk about why this is probably and unfortunately not exploitable. The overflow is into .bss. Normally, you would try to overflow into function pointers or interesting variables, or maybe try to reach the heap. In this case we need to overflow quite a bit to reach anything interesting (e.g. there are variables like szScriptName that might enable interesting attack ideas).

Overflowing into interesting parts seems to be mitigated in a hilarious way:

All of this would not be a problem. We could reach interesting variables or function pointers within the next 8k bytes easily. But now to the hilarious part: 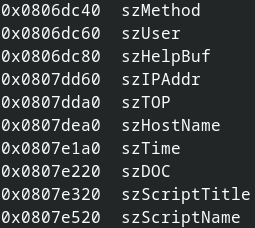 szUser or szMethod are the variables that we can overflow. Additionally, there is this annoying and unused “guard variable” szHelpBuf that does nothing and seems to be here just to provide a buffer space of 65k right after the two problematic variables. This additionally limits the possibility to overflow into something interesting right after that guard variable. WTF?

I refuse to believe that this ends the story, this doesn’t seem like a sane way of mitigating a buffer overflow. If you have any ideas on how to get around this, let me know! 😀

Let me know what you think! Enjoy your upcoming holidays!