A while back Stefan and I held a little crash course/orientation run on hardware hacking at a German Fachhochschule. Planning to use something “real” we went for a simple electronic safe with a bunch of different vulnerabilities. I guess most security guys who spend a fair amount of time in hotels will understand this choice. As we needed something we could rely on would break, we stripped the device and swapped the original electronics for our own. The result was the “Damn Vulnerable Safe”.

The Damn Vulnerable Safe (DVS) is based on a little black safe we bought on the Internet. It has a 12 button pad (0-9, #, *), three hardwired LEDs, a knob for opening the safe and (it had) a physical lock for back up access. Due to it’s color it was the perfect black box. But it sadly was not a reasonable safe. Although this is not a product review, a little hint on the side: If you ever buy a cheap (~50€) safe expect security on the level of a children’s toy. 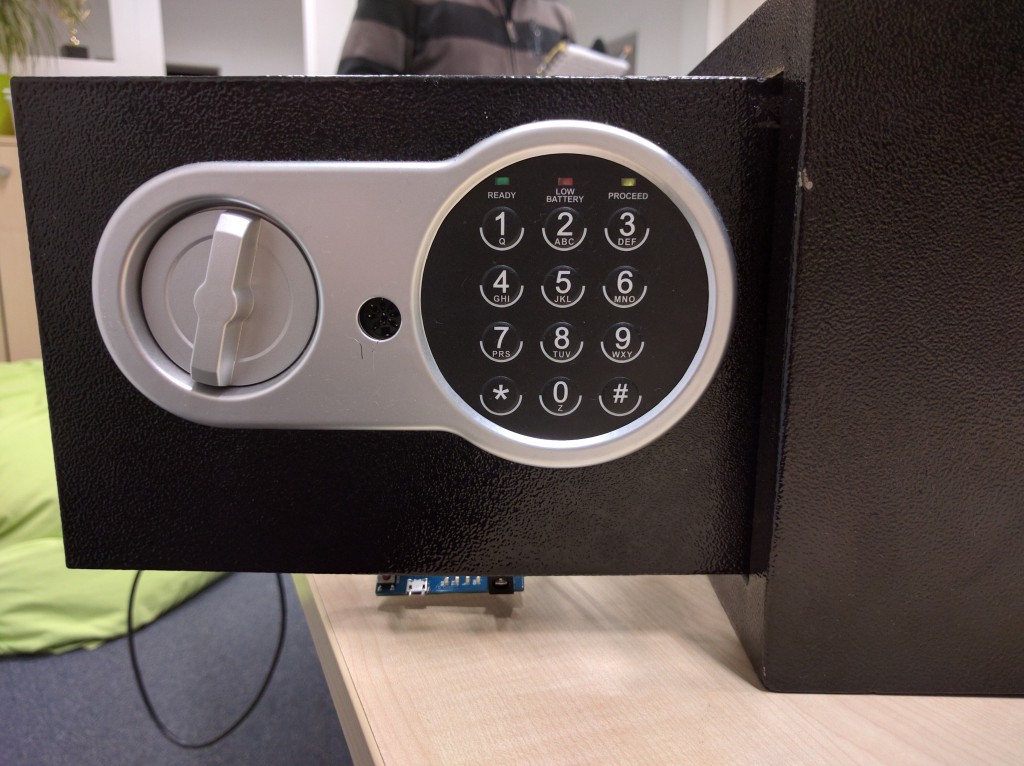 For the course we needed a simple device which could be broken by beginners while covering vulnerabilities existing in real life. It had to be reliable in such a way that nobody would set it in an “unknown state”, in order to reduce trouble shooting and ensure proper hacking. Also we needed something with a safe “infrastructure”, meaning the device itself should work and be resettable.
From the beginning on we decided to stick to something Arduino based, as these are well known, documented and simple but at the same time flexible and cheap. Also they offered enough IO pins and different interfaces, which would be attackable. Above that we had some and could reuse them!

Our implementation of the DVS was rigged together by using an Arduino Leonardo, the original PCB which was in the safe and a few jumper wires. Although it might not look professional it’s a great feeling to crack open a black box and get access to some loose wires!
We stuck to the original PCB as it already contained a header for the PIN pad’s cable and driver circuit for the locking mechanism. All we did was remove the original controller, trace the PCB and work out what which pin actually did. We then connected all lines to the Arduino and wrote basic driver functions for all sensors and actors in the safe. For powering, we were able to use the battery compartment in the safe, so no cables were necessary. Adding a little bit of black nasty made sure that no wires would go loose.

Of course one needs a certain set of tools to attack a device like the DVS. As we did not want to >need< a large toolkit during the course, all exercises are optimized in such a way that a multimeter, an Arduino (for automation and for reading data from BUSes) and a few jumper wires are sufficient.
Although a JTAGulator can be very helpful for identifying UART and also a Logic Analyzer would be a great for finding other interfaces, we stuck to the “grey box” approach. If you have opened it for the first time, you have a look inside and start tracing wires! Even though a locked safe is a completely black box, you can expect an attacker to have done his homework. Speaking safes, this means an attacker will most surely have bought his own, opened it and done some reversing. This way it is easy to identify pins and their use. It’s actually also a good way of teaching how to find and read datasheets. Just as with all other attacks and penetration tests, recon is key to an efficient approach. Although we did the same course four times on a single day, we decided against making a set of slides. The aim was to make the students work on the box and not read slides. Above that we knew we had far more tasks than time.
Eventually we used a text file and only gave a very rough description of tasks and asked a few questions which made all attendees stay on track:

Using the multimeter, their ears and eyes all attendees managed to quickly open the safe and identify multiple vulnerabilities.
For the last tasked all started some automation code on the Arduino. With the right set of code it can even be used as a very simple logic analyzer.

Taking it to the Next Level

Everything that we ourselves have learned while preparing and giving the course is currently flowing into our Troopers’16 Hardware Hacking training. While the DVS course was aimed at giving a dirty 90 minutes of fun, hacking and breaking stuff, the Troopers training is actually aimed at teaching the attendees everything they need to know for their own first steps with a black box.
We will cover:

Right now we’re in the middle of finishing a custom victim to be broken, owned and reversed in March. We are creating both hardware and software with stacks of vulnerabilities and functions which are broken by principle.

If you’d like to check out the result, Stefan and I would both be very happy to welcome you at our training during Troopers!